Politics in the Workplace 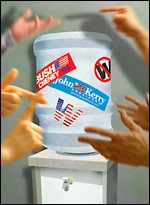 While some workplaces welcome spirited conversations, managers need to know how to defuse tense situations.

By Stacy A. Teicher | Staff writer of The Christian Science Monitor